We support the Fridays for Future Movement! Protests are more than justified! 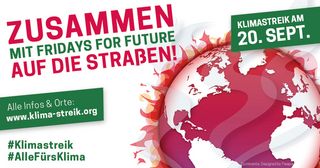 From 10:00 to 12:00 we join the protest of the "Fridays for Future" movement and take part in the "Tutzinger Klimatag", which is jointly organized by the Tutzing schools, the two churches, the municipality and others. Organic Services is clearly committed to the demands of the Fridays for Future movement, which receive broad support from many other social groups. We refer in particular to Scientists for Future: “The facts are on the table, the warnings are pronounced. Now it's time to act!”
Here is the link to comments, facts and sources of Scientists for Future in English, Spanish and German.

Join forces with Fridays for Future. The youth strikers have managed to put increasing pressure on decision-makers.

We are here to help you: