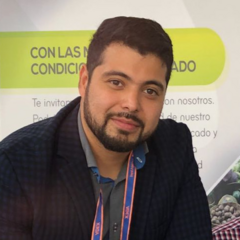 Noé Alejandro Riva and I manage to schedule a Skype call for when we are both awake and working – 10 am in Colombia, 5 pm in Germany. He has been working for MAYACERT for six years now. His father who – confusingly enough for me – has the same name as his son, founded MAYACERT in 1997. Since then, the company has become one of the leading multi-certification-body for agriculture, apiculture and food processing in Latin America.

“When my father set up the certification business 22 years ago in Guatemala, he had a clear focus on organic coffee certification in the area. Soon enough, he expanded to Mexico, Colombia and Peru. Today, we certify any food products, including livestock and beekeeping – only fishery is not part of our portfolio. About 75% of the audits and inspections we carry out are for organic certification, especially based on the USDA and EU standards, but we also certify fair trade, UTZ and other standards.” Overall, 95 people work for MAYACERT. Whilst the head office is still in Guatemala City, every country has its own local office as well. About 25 people work in administration, the rest of the staff is mostly ‘on the road’, inspecting their clients’ farms and manufacturing sites.

When it came to finding an appropriate ICT solution, re-inventing the wheel did not pay off

I ask Noé how he learned about Ecert Basic. “I met Gerald A. Herrmann during a NOP conference in Portland 2017. At that time, we at MAYACERT had already realized that managing our audit and certification data with Excel was no longer appropriate. Our certification activities had developed well, we were gaining more and more clients, which also meant that we had a lot more data to administer. We therefore tried to program our own software to become more efficient. We knew that we needed a reliable system to be able to meet the demands of both our clients and our accreditation bodies whilst spending less time and money on manual data administration. Unfortunately, our own program never worked the way it was supposed to, so we had to look for an alternative. It was back then that I remembered my conversation with Gerald, where he had told me that his consultancy offered an ICT-solution for small and local certifiers like us.”

Ecert is the globally leading certification management software. Noé he had been working with the system at his previous job with FLOCERT in Bonn/Germany, he was familiar with it, but he also knew that it was probably too expensive for MAYACERT to afford. “When I spoke to Gerald about their software, I could hardly believe the coincidence. The solution he offered, Ecert Basic, is based on Ecert, but is less complex and more affordable. If we had known that there was an off-the-shelf-version of Ecert like this, we might have started to work with it much earlier. Looking back, I wished we had not tried to reinvent the wheel by inventing our own software tool but had looked for what is already out there.”

The transition phase to Ecert Basic took a while, but both Organic Services as well as MAYACERT learned from that. "We were in such need for a new system, that we started the data migration straight away, before we had trained everyone properly how to use the system. Change is difficult for any kind of organization, but to change successfully, it’s best to have the staff on board right from the beginning.” In 2018, Javier Montanez, Organic Services’ client manager for Ecert Basic, had been on a business trip to South America and agreed to add another week to his trip to visit MAYACERT. “This really got us going. Today, all our office staff work with the system every day, our auditors use it every second day on average. We are very happy with the system!”

Whenever one off his staff has a problem with Ecert Basic, a question to ask or a new product to be listed, he or she passes the request to Noé who speaks to our client manager Javier nearly every week. This way, Noé can pre-filter the requests and cluster them. But when he is on holidays, his colleagues can also contact Javier directly, who’s native language is – luckily – Spanish, or contact Organic Services through the helpdesk.

A glance into the future: are more farmers and manufacturers going to look into certification?

I want to know what hampers more farmers and producers in the countries where he operates to obtain certification for fair and sustainable practices. “There is no general answer to this, every county has different conditions.   Look at Mexico. Many people are abandoning their farms and move to the big cities, and industrialization is being strongly pushed by international investments. Both does not encourage organic or fair trade practices. Our number of Mexican clients is declining. Peru and Colombia, on the other hand, are developing quite positively and we see a lot of potential. Generally speaking, in countries where conventional agriculture is already very developed, many farmers are afraid to change to organic, which is often perceived as the inefficient way farming used to be 'in the old days'. However, when a farmer, a grower group or a manufacturer is willing to convert, implementation often fails as administrative burdens of certification can be quite overwhelming. You have to understand that the success of obtaining a certification often depends on one single person who coordinates everything! Having said that, our experience has also showed us that organizations who follow a holistic approach which, besides aiming at making money, includes improving the health of their employees and preserving their natural surroundings, are most likely to obtain certification."

Some advice for other small and local certifiers

I ask Noé which advice he would like to share with other small and local certifiers. "Don't make the same mistakes as we did, don't try to reinvent the weel. If you feel that you need an ICT solution to manage your audit and certification processes, look what is already there and don’t loose too much time trying to program something that is unlikely to work.” So why do many small and local certifiers still shy away from a solution like Ecert Basic?

”Often enough, people just see the price of a software and then think ‘oh, we can do this cheaper in-house’, but they don’t see the actual costs this causes, especially when it fails. On top of that, I think that many certifiers are afraid that they may risk their accreditation if they change their running system, whilst they don’t realize that the highest risk of them losing their accreditation is to continue working with an outdated, vulnerable system. Change takes courage, but for us, it was worth it. Our accreditation body in the USA, the USDA, works with Ecert themselves, so for them it was a piece of cake to understand how we work here with Ecert Basic. The same is true for other accreditation bodies. We highly recommend the use of the tool; we have become much more efficient since we use it.”

We would like to thank Noé for taking the time to share his thoughts and experiences with us!