Choosing collaboration over competition: some members of the South-East Asian cooperation "Certification Alliance" have just introduced Ecert Basic as a central tool for all administration, inspection and certification procedures. In a world that is less and less able and willing to compromise and to working together this is an exceptional lighthouse achievement! 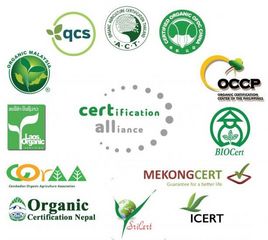 Due to stringent regulatory requirements, it is often a challenge for local certification bodies in emerging countries to establish an export certification. International organic certification schemes and their implementation can be very complex and local certifiers may find it hard to meet the accreditation requirements. Their usually small number of customers and the generally lower living standards aggravates the situation as the revenue stream tends to be limited. To compete with internationally organised, professional certification bodies (who often have several thousands of customers and streamlined procedures) seems to be an unfair battle in which the local certifier can only loose.

Facing these circumstances, the Certification Alliance was established in 2008 by local certification bodies from South-East Asia who chose collaboration over competition and joined forces. They managed to reduce the overall costs for accreditation and meanwhile share a common inspector base. Their mission: making certification affordable for organic producers in countries with small organic markets.

In order to be able to harmonize certification processes, some members decided to introduce the Ecert Basic Software as a central tool for all administration, inspection and certification procedures. In a (organic) world that is less and less able and willing to compromise and to working together this is an exceptional lighthouse achievement! The collaborating members include: